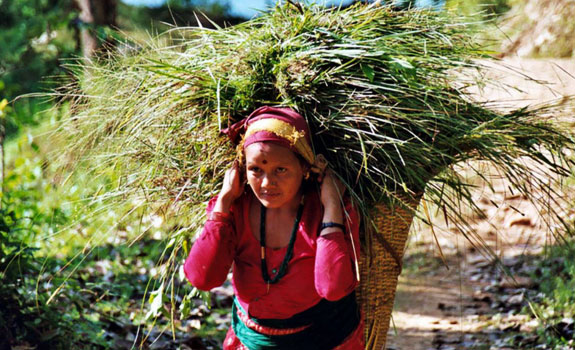 1. Cows are sacred in Nepal

Cow is the national animal of the country whereas Hinduism is the religion followed by the majority of the population in Nepal. Within Hinduism, cows are incarnation or avatar of the divine Goddess Laxmi making it sacred and inviolable. Cows are worshipped during major Hindu festival of Tihar. It is illegal to kill the animal here and given their religious values, people do not eat cows.

2. Nepal is the only country with a non-rectangular flag

Did you know that the flag of Nepal is the only flag in the world that is not rectangular or not quadrilateral in shape? Nepal’s flag is red with two triangular shapes stacked on one another. The crimson red color of the flag signifies the color of its national flower, rhododendron. The color also stands for victory in war and the braveness of the Nepalese people. The blue border of the flag symbolizes peace. The two triangles stand for the mountains of Nepal. The shape of the sun and the moon on the flag represents the aggressiveness of the warriors and calm and peace loving nature of the people.

3. Black outs, called load-shedding, are a way of life here

Electricity is on? SWEET! Nepal has developed a system called “load shedding” which, in essence, is its answer to crippled infrastructure that has not been able to withstand the addition of millions of people using electrical devices, thus leaving the city on a scheduled electricity regimen. The load-shedding can go up to 16 hours per day depending on the season.

4. Nepalese have their own calendar that dates 2071 as of now

Nepali calendar is a Bikram Sambat (B.S.) calendar and also called Nepali Patro. Nepali Calendar is approximately 56 years and 8½ months ahead of the Gregorian calendar (A.D). The Nepalese New Year falls in the middle of April. Unlike Gregorian months, the lengths of Nepali months are not predetermined, and change from year to year, varying from 29 days to 32 days.

5. Home to the only living goddess in the world

Nowhere else do you get an opportunity to witness and encounter a live goddess but in Nepal. Kumari is the tradition of worshiping young pre-pubescent girls believed to be manifestations of the divine female energy or ‘devi’ in Hindu-Buddhist religious tradition that continues till date. Thousands of people throng in and around the Kathmandu Durbar Square to pay homage to the Living Goddess on Indra Jatra festival.

In a span of 100 km going from South to North at any part of Nepal you can experience hot tropical climate to bone chilling Arctic type weather. Nepal is the only country with altitudinal variation that ranges from 70 meters to 8848 meters. The elevation of the country ranges from less than 100 meters above sea level in the Terai, to the highest point on earth, the summit of Mt. Everest, at 8,848 meters, all within a distance of about 150km, resulting in climatic conditions ranging from sub-tropical to Arctic.

Once named as the weed capital with the best weeds in the world at the Freak Street, Nepal still has got a wide prospect with regards to weed. Although weed is said to be illegal and is not available for buy and sale, you can find the growth of weeds everywhere mostly in the rural area, around the roads, ditches, farm lands, mountainside and everywhere. Who would not love to fire a pot and get along with the fine environment that Nepal beholds.

Nepal holds a number of world records and prizes around the world. With Mount Everest being the peak of the world at the height of 8,848 m, there are others like the Tilicho Lake- the highest lake on earth at the height of 4800m, Shey Phoksundo Lake- the deepest lake of 145m at the height of 3600m, the deepest gorge of Kaligandaki of 1200m and the highest valley on Earth- the Arun valley. Nepal also holds some of the world famous Guinness world records and different international prizes, international recognitions and involvements that have made the profile of this small country to be one of the best.

The popular mythical creature, Yeti or Abominable Snowman of the Himalayas, is said to inhabit the Himalayan region of Nepal and Tibet. In 1953, Sir Edmund Hillary and Tenzing Norgay reported seeing large footprints while scaling Mount Everest and led an expedition to find the Yeti in 1958. But no one till date has been able to unfold the mystery of the giant Yeti in the Himalayas.

Elephant polo is a variant of polo played while riding elephants which originated from Meghauli in Nepal. Tiger Tops in Nepal remains the headquarters of elephant polo and the site of the World Elephant Polo Championships. The month of November/December is the time when the country’s major event of elephant polo is organized, with thousands of tourists hammering in from all around the globe.