Situated in the south-western part of Tibet bordering the Kumaon hills and Nepal, is Mt. Kailash, Asia’s most sacred mountain. Mt. Kailash is a mountain divine and holy to Hindus, Buddhists, Jains and Bon-Pos, those adherents of ancient animistic beliefs. It dominates the region with the sheer awesomeness of its four-sided summit, and its centrality in the mythology of a billion of people. The supreme mountain is believed to be the physical embodiment of the mythical Mt. Meru from Sanskrit, said to be the center of the universe or ‘navel of the world’ that forms the axis of this world system. 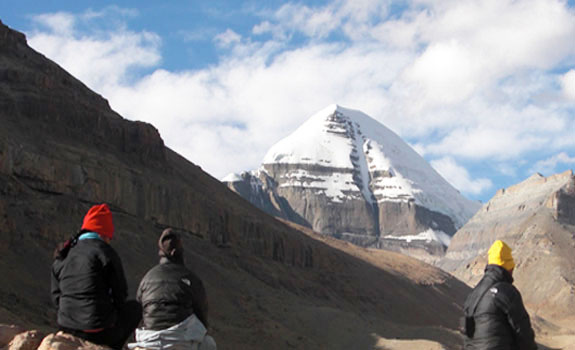 To Hindus, Kailash is the abode of Shiva and nearby Manasarovar Lake is the soul of Brahma. Tibetans call Kailash Kang Rimpoche. Jains worship it as Mt Ashtapada, the peak from which the religion’s founder, Rishabanatha, achieved spiritual liberation. Followers of Bon-Po, the ancient pre- Buddhist shamanistic religion of Tibet, revere Kailas as the soul of Tibet.

Mt. Kailash rises from the shores of the sacred Mansarovar Lake soaring to 6714m. The holy Kailash Circuit (prakrama or kora) is the three-day ritual circumbulation that takes you along a 52km kora. The circuit is considered to be the holiest of all Hindu as well as Buddhist pilgrimages and is believed that a single circuit erases the accumulated sins of a lifetime while 108 circumbulation will achieve salvation or nirvana. People prostrate to the holy ground at the rock cairns that mark the four footprints of the Buddha. Over the centuries pilgrims have constantly been braving their way to Mt. Kailash in order to attain spiritual enlightenment despite the harsh weather and often forbidding terrain.

Sprawling below Mt. Kailash is the sacred lake Manasarovar (4560m). The name Manasarovar is derived from two words: ‘manas’ meaning mind or consciousness and sarovara meaning lake. Hence Mansarovar stands as ‘The Lake of Consciousness and Enlightenment’. According to Hindu mythology, one who takes a plunge in Mansarovar Lake reaches Brahmalok (heaven) where Lord Brahma resides whereas drinking its water relinquishes the sins of a hundred lifetimes. With its sapphire-blue waters, sandy shoreline and snowcapped mountains backdrop, Mansarovar is equally fascinating to nature lovers as it is to the pilgrims. The lake has a few monasteries on its shores, the most notable of which is the ancient Chiu Gompa Monastery built on a steep hill, exhibiting the look as if it has been carved right out of the rock. Scores of devotees who are in search of nirvana frequent Mt. Kailash that echoes spirituality and transcendence. And if you wish to get closer to the world beyond and seek salvation yourself, our ‘Kailash Mansarovar Yatra’ might just be the soul-cleansing experience that you have been looking for: