Explore with us the national treasures of Bhutan that comprise traditional art and craft, cultural diversity, traditional society, and wealth of flora and fauna in the company mid-hill Himalayan vistas. 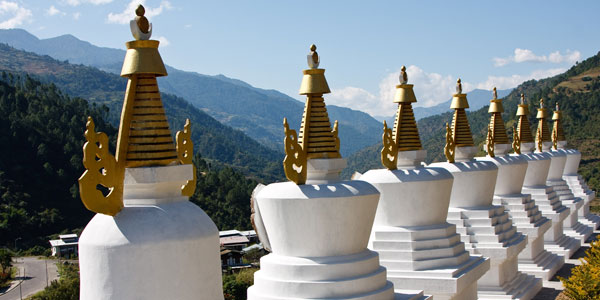 From time immemorial traditional arts and crafts form the integral part of Bhutanese cultural heritage. If one happens to visit in Bhutan Bhutanese traditional arts and crafts primarily attract the attention of travelers. Whether it be locally woven textiles or bamboo products or the art works on stone, wood and slate you can see creative practices of Bhutanese people. Likewise, the paintings on the imagery of the Bhutanese landscape and ancient art depicted on temples, Dzongs, Chortens and houses capture the eyes of travelers throughout Bhutan.

Another important thing that you can explore in Bhutan is its cultural diversity. Despite being one of the smallest countries in the world, Bhutan’s cultural diversity and richness are profound.
While travelling in Bhutan grab the opportunity to capture the cultural sites like funeral, birth and marriage ceremonies. Besides, you can also explore Bhutanese cultural festivals that are uniquely celebrated throughout the kingdom.

3. Wealth of Flora and Fauna

The wide varieties of flora and fauna available in Bhutan are unmatched due to conservation and its wide altitudinal range. Nearly 60% of the plant species found in the Himalayan states are present in Bhutan. Likewise, a wide range of rare animals can also be found in the dense forest and high mountains of Bhutan. With its rich wealth of flora and fauna, Bhutan boasts as one of the last biodiversity hotspots in the world.

Something strange and intriguing!!! Bhutan stresses on Gross National Happiness as national policy. Understanding Bhutan’s Gross National Happiness will be another milestone if you happen to travel in the land of happiness. Bhutan advocates that amassing material wealth does not necessarily lead to happiness. Hence, its national objective reiterates that the true development of human society can occur when material and spiritual development occur side by side. The Himalayan kingdom sees its peoples’ happiness in the pursuit of spiritual happiness.

Even though the majority of Bhutanese society belongs to Buddhism the Buddhist nation does not impose its main stream religious values on other sects. Once you happen to travel in Bhutan Bhutanese traditional society and its religious way of people will be open space for you to explore. Apart from this, the tour of Bhutan also lets you explore the cult of animism that is the ancient practice of animal sacrifice.
6. Archery

Archery, the national sport of Bhutan, is another area of exploration while traveling to the Himalayan kingdom. The national sport plays a significant role in many Bhutanese myths and legends. The unique sport is organized throughout the country especially in the occasion of local festivals, religious festivals, and public holidays. Apart from watching this sport, travelers can also enjoy the sites like local Dzonkhag and various cultural monuments where is this sport is generally organized.