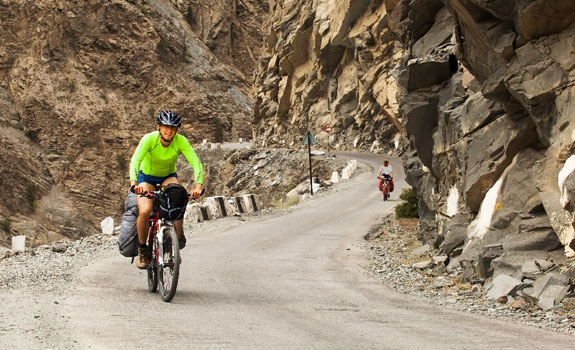 Cycling as a sport is getting bigger by the day here–especially among the members of the new generation. If you are interested in the rough and tumble of things and want to head out of the city’s confines once in a while, you might want to check out two of the more popular variants of the sport among cyclists in Nepal.

In cross-country cycling, you ride over various terrains, either as a competitor in a race against others or just by yourself. This cycling format became an Olympic sport in 1996 and is the only mountain-biking sport featured in the Olympics. An XC course basically consists of a mix of forest paths, gravel roads and paved roads connecting to other trails.

An XC cycle generally weighs between 7-19 kg and usually sports 26 and 29 inch rims. It is necessary for an XC cycle to have front-suspension, but some bikes features rear-suspension as well. The suspension travel is approximately 100mm, but it is customizable and people usually prefer a 125-150mm suspension travel.

Cross-country cycling doesn’t require a lot of equipment but it does have some basic requirements.

Like with any other sport, cross-country cycling also has its own unique set of jerseys: most have storage pockets in the area around your back, for storing water, tools and so on.

You’ll need special kinds of shorts that are padded in the crotch area because bumpy cross-country rides can be pretty harsh on a rider’s buttocks.

These specially designed bags are basically pouches for storing water or juice. They usually come with a long pipe attached: one end dips into the pouch, and you hang the rest of the loop around your neck area, to allow you to conveniently quench your thirst on the go.

To keep you cool, half-helmets used for cross-country rides are designed so as to allow ample air to flow through. They are mostly crafted aerodynamically to allow for a streamlined ride against the wind.

When riding cross-country, you can put a lot of pressure on your wrists, and it would be wise to opt for padded gloves that can absorb some of the pressure as well as protect your hands in case of a crash.

The importance of goggles can’t be overstated as they help protect the eyes from wind gusts and dirt particles.

Downhill cycling is exactly what its name suggests. It’s a time-trial event held on a steep hill with lots of obstacles like trees, rocks, ramps, jumps, etc. The first downhill time-trial race took place in Fairfax, California, on October 21, 1976, and since then the sport has proliferated around the world. It is a perfect sport for Nepal’s hilly terrains, and with more downhill competitions being organized here and with more tracks being created too, the country might soon be producing world beaters.

Downhill cycles are sturdy and heavy because a DH cycle must allow its rider to barrel down the slope without, hopefully, throwing him off. It is mandatory for a DH cycle to be a full-suspension cycle, unlike the XC cycle, which can be a hard-tail cycle too (i.e. a cycle that has a suspension in the front but no suspension in the rear). DH cycles have a suspension travel of over 200 mm in the rear and 175-200 mm travel in the front, which allow them to absorb the impact the jumps and landings create. They have a more up-right riding position, in contrast to the more aggressive position of the XC cycles.

Downhill riders are more prone to injuries compared to cross-country cyclists due to the strenuous nature of downhill steeps, so proper protective gear is essential!

A DH helmet is quite similar to the off-road helmets used in motorbikes but it is smaller and lighter. A full-face helmet is mandatory in a DH race as the likelihood of a rider’s taking a fall is quite high.

A neck brace, as the name suggests, is protective gear worn around a rider’s neck to protect him from neck injuries. What a neck brace does is spread the impact from the neck area to the other parts of the body and thereby decrease the impact’s force on the neck.

An upper-body armor has chest, shoulder, elbow and back protectors, which spreads the impact force to a bigger area and minimizes the force of the impact during a fall.

These shorts offer more protection than the XC shorts: besides the crotch area, they also have padding around the tail-bone and thigh regions.

Knee and shin guards prevent your knees from bending the wrong way in the event of a crash. They also protect your knees and shins from getting scraped.

Although most of these pieces of equipment are recommended for use during sport activities, it is not a bad idea to make use of them during daily commutes as well. Using DH gear in the streets might be overkill, but XC accessories definitely are fine for street riding.