My husband and I have just returned from one of the most remarkable travel experiences we have had as of yet. Every year for our anniversary we go somewhere new according to the alphabet, and this year was Nepal for “N.” My love of the mountains fueled the decision to have the chance to see the biggest mountains in the world. But being from the southern United States, our high altitude experience was very limited, to say the least. Also, a two week plus trek would be the longest we had done. I did not need to worry.

My decision to join a HGT group was based on high reviews in Trip Advisor, their high ethical standards for their people and their land, and their highly competitive price. (Most USA companies were charging twice as much.) It is hard to know whether you are making the best decision when the company is based halfway around the world, but right from the start HGT was professional and reassuring. Tony Monaco, their US correspondent, is also native to the southern US, and graciously answered my barrage of questions week after week beforehand. He also called shortly before our departure to check ours on equipment list, training, and any last minute concerns. 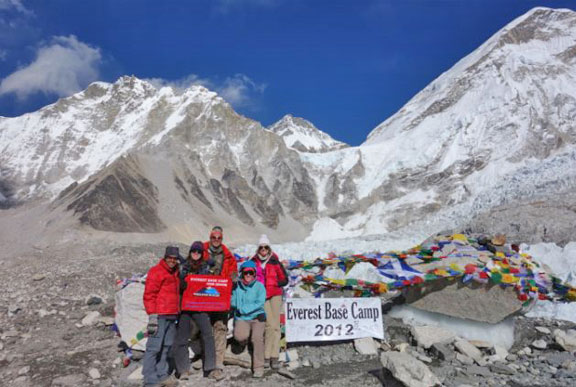 Indeed, the scariest moment of the trip was upon arrival in Kathmandu after going through immigration and customs (which took quite a while). There was some confusion as to where to meet HGT at the airport. No fault to HGT, but we walked right pass Rishi who was holding our sign up against the airport corridor’s window and instead went to the outside transportation area where many other people were waiting with signs. This was largely due to airport staff ushering us quickly through the very crowded corridor. We walked up and down the outside area, unable to locate our contingent, and to make matters worse, did not have phone service to contact anyone. I was seriously thinking we had made a huge mistake. After 30 minutes or so (but what seemed like hours), we were just contemplating purchasing a taxi to the Hotel Shanker when luckily we spotted another HGT sign (although not with our names), and they called Rishi. Lesson learned… be sure to slow down long enough to look in all places for signs, and have a backup plan in case you don’t have phone service.

The Hotel Shanker was great. In fact, another person who had joined our group last minute canceled her post-trek hotel accommodations to stay at the Hotel Shanker instead. After checking into the hotel, Rishi showed us through the streets of Thamel to the HGT office. Again, they were professional and courteous during their briefing of our trip, and I had the feeling that they were concerned only for our comfort and wellbeing. This was made evident when we were given the option to leave for Lukla the next morning, instead of two days later when the weather forecast was calling for more difficult flying conditions. It was an exhausting whirlwind of activity after nearly 30 hours of travel time already, but it speaks volumes that they gave us the option.

During the trek itself, the guides, accommodations, and food were all superb. Rishi, our guide, was very knowledgeable, professional, and spoke very good English. It was very impressive how he would send the assistant guide ahead to check in to the non-reservable lodges to ensure we had the best rooms available once the majority of the day’s trek was through. The lodges were much quieter on the Gokyo Lakes side. Lobuche was very crowded and the Above the Clouds lodge provided us with the least desirable room of the trek. However, after a long wait for dinner, Rishi and the lodge surprised us with a chocolate cake for my husband’s birthday, so we can’t really complain! Rishi would also brief us after meals each evening and morning on the day’s trek. What to expect, and any additional gear we may need to have with us. He advised us what to and not to eat as we gained in altitude, and frequently asked us how we were doing if we showed any signs of headache or illness. He did his best to make it lighthearted when fatigue set in, and we were given the opportunity to rest whenever needed. However, he also pushed us to continue when the appropriate rest time was over…after all, we had a schedule to keep!!

I worried at first, but I’m so happy we decided to do the route through the Gokyo Lakes. You do need to be in very good physical condition, particularly for the 17-day itinerary. It would have been easier to spread it out a few more days if you had the time to spare, but we were happy with the shorter time. The day of the Cho La pass was indeed the most difficult day, but everyone made it by going slow and steady. And it was such a feeling of accomplishment at the top of the pass! The worries and doubts went away and were instead replaced by confidence and an eagerness for the rest of the trek. Even though you’re tired and at times ready for the day to be through, make sure you stop long enough to drink in the sights with eyes and camera… after all, that is what you are there for, and all the views were just amazing!!

Due to our early start and fortunately no Lukla airport delays, we were able to catch an early flight out of Kathmandu that allowed us to be home three days ahead of schedule. HGT was very accommodating and helpful with flight rescheduling, and true to their word, are reimbursing us for the two fewer nights at the Hotel Shanker.

If you are going to the Himalayas and are debating whether HGT is for you, please do not be concerned. We are known in the South for our hospitality, and I cannot say enough about this group of people. We could not have been made to feel more at home away from home.

…Sorrow looks back, worry looks around, but faith looks UP!!..