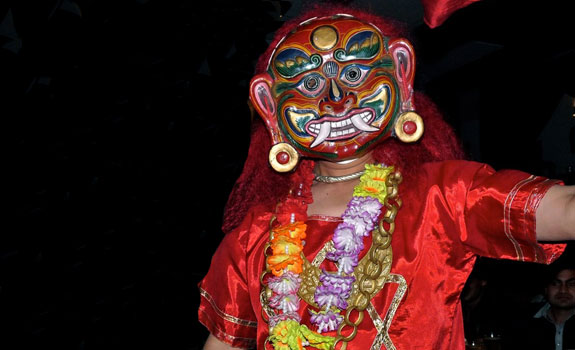 Lakhey is a demon in Newari folklore. But he’s often defined as ‘the deity among the demons’.   Believed to be a carnivorous demon who occupies the woods, Lakhey is said to have had a covenant with the cities’ early settlers who ensured its domain and even allowed it access to the cities in return for the security of the inhabitants.

And this compact with the devil is what the Newar community revives every year in the form of the Lakhey dance. Every Newar community has its own Lakhey, which they believe protects them during distress. Gunla Lakhey comes out during the month of Gunla—the tenth month of the year in the Nepal Sambat calendar— which corresponds to August. Myths hold that in ancient times when the settlers started dying due to diseases like cholera, the elders sprang into action to put an end to the epidemic by performing the Lakhey dance, to appease the demon which then used its powers to end the scourge.

At Bungmati, a local is chosen to become the Lakhey for the year. He dons the Lakhey’s mask and attires himself in its colorful dress and ornaments with the help of his companions. Then he ventures out into the neighborhoods, performing wild gyrating moves accompanied by the thumping traditional Newari music of the dhime and bhushya.

While he dances thus, he also chases another demon called Teenpakcha, who represents the trespassing devil that taunts the Gunla Lakhey. Locals follow this chase in the belief that the one touched by the Lakhey is cleansed of evil spells and harmful diseases.

And after three hours of frantic dance and chase, having rid the locals of ills and diseases, the performer returns home weary and fatigued.