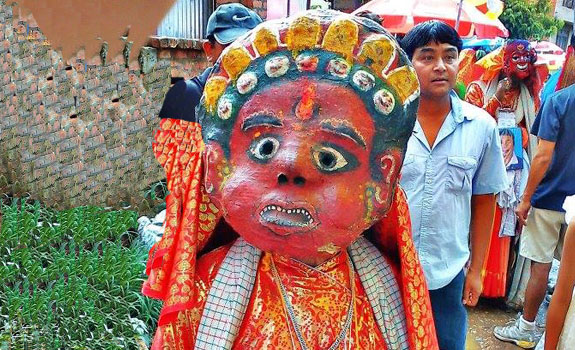 The traditional festival of Gaijatra translated as ‘cow festival’ was observed on Monday amidst fun, gaiety, humor, satire and entertainment throughout the country. The festival, beginning on the first day of the waning moon in the month of Bhadra as per the lunar calendar, lasts for a week.

Legends have it that King Pratap Malla initiated the festival in the 17th century, asking the subjects to come out with cows and mimicry, particularly to console his bereaved wife after their son’s untimely death. The festival dedicated to the dead family is celebrated mainly by Newar communities of Kathmandu, Bhaktapur and Lalitpur, and other districts. The festival is celebrated by taking out family processions in the memory of deceased family members. One of the members of the family is dressed as a cow and is mandated to lead the family procession. It is believed that the celebration of Gai Jatra opens up the way to heaven for the deceased family members.

Customarily, each household that lost a member during the past year carries out a ‘jatra’ or a carnival-like procession headed by a cow. In lieu of a cow, a young boy dressed as ‘gai’ or cow is considered a fair alternative. The procession then goes on what is called ‘nagar parikrama’ meaning a march around the city. Devotees hold the tails of the cow which, on this day, is considered equivalent to crossing the holy Baitarani River.  The festival is observed to ask for salvation and peace for departed loved ones. It is believed that the cow, revered as a holy animal by Hindus, will help the deceased relative’s journey to heaven.

During this time-honored tradition, people of all ages in the guise of cows and lunatics go around the city, wearing odd costumes to commemorate those who died during the past year. The bereaved families offer fruits, bread, beaten rice, curd and money to those participating in the festival. A traditional Lakhe dance is also seen all over the streets on Gaijatra.

Apart from its religious values, Gai Jatra is also marked as the festival of humor and satire. This tradition has been continued in the form of the Gaijatra festival during which people also give vent to pent-up feelings towards social and political anomalies, human follies and other contemporary affairs through comic skits, cartoons and the like. Comedians and satirists enthrall the crowds in various places. The satires of the comedians mainly go about the malpractices of society, political anarchies, among other social subjects. Newspapers and magazines also bring out special humor satire supplements to mark the occasion.