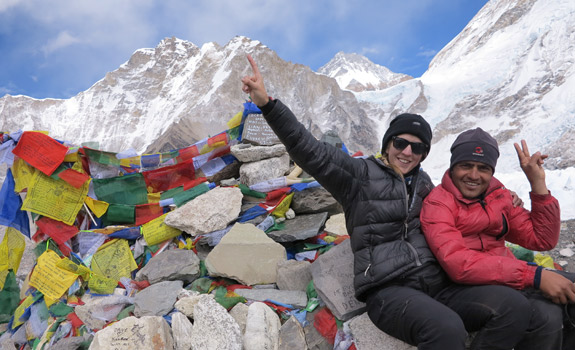 Arguably the most famous trekking route in the world, Everest Base Camp trek unfolds with an air of mystery and grandeur. Being the tallest mountain in the world, Mount Everest has a mystique and worldwide reputation that sets it apart from any other mountain. EBC trek follows in the footsteps of legends such as George Mallory, Edmund Hillary, and Tenzing Norgay as you ascend from verdant Lukla to the vast glaciers and razor-sharp ridgelines of the Everest Himalayas. This is perhaps the definitive Himalayan trek, climbing from teahouse to teahouse amidst snow peaks to the base of the tallest mountain on earth. It is without a doubt one of the most sought after trekking route in the world and the ultimate opportunity for one to be at the foot of world’s highest mountain.

Samantha Laidlaw recently accomplished her 17 days Everest Base Camp (EBC) trek adventure with Himalayan Glacier. When asked about her account on EBC experience, she simply puts it as ‘larger than life’ having encountered the immense and arduous Mt. Everest in person. Apart from getting up close with the mighty mountain, Samantha also treasures the breathtaking scenery, mountain views, local cuisine, markets, monasteries, museums and Sherpa people of all. Having been profoundly touched by the Nepalese hospitality, the Sherpa communities have made a life-long impression in her life as she describes them as ‘wonderfully kind-hearted people’. Not only did she enjoy the trek but was also immensely happy with the Himalayan Glacier’s service and not to mention the guide, Rishi. Samantha even personally recommended Himalayan Glacier and Rishi, to a number of people in her country, Australia who are interested in trekking in Nepal.

The trek also offers sightseeing around Sagarmatha National Park, a world heritage site which serves as a refuge to a multitude of Himalayan floras and faunas. You visit the very famous Tengboche monastery which is the largest monastery of the Everest region of Nepal en route. The trek has a number of stunning attractions, not least of these is being able to say you have visited the highest mountain in the world. The heady mix of natural beauty, fascinating culture and a personal sense of achievement, as well as warm Nepalese hospitality, makes the Everest Base Camp trek one of the world’s most unforgettable. If you are looking for the ultimate adventure in the Himalayas, Everest Base Camp is the ideal choice. Please go through the following link for further information on the trek: