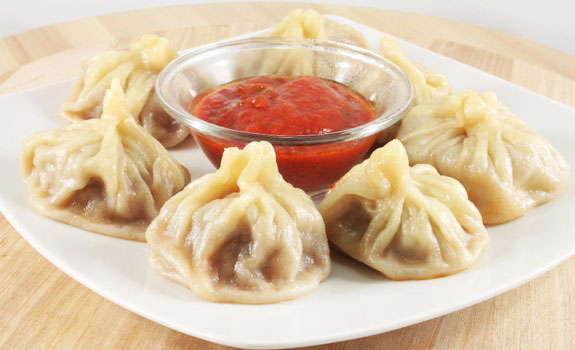 Two friends went out to eat in a restaurant once. Both of them were presented menus which they scouted thoroughly. And in the end, after a long consideration, they handed the menu back to the waiter and ordered what they always ordered: Two plates of momo.

Momos are probably one of the most ubiquitous foods in Kathmandu at present. Everywhere in the city, outside bigger or smaller restaurants, one can find giant multilayered aluminum steamers with around a hundred momos being cooked in each layer. And everyone in the restaurant is eagerly waiting for their plates of momos.

Agrima Dewan, 19, a student, thinks that the name itself is poetic enough for people to fall in love with momos.

“Personally, I think you don’t really need a reason to love momos; it’s all in the name already,” she says. She feels that whatever strange and exotic delicacies a restaurant may offer, in Nepal, its menu is incomplete without momos.

It would be an understatement to say that momos have become an unavoidable part of our lives. It’s more than that. No matter what we plan on eating in a restaurant, we generally also order a plate of momo, like adding cherry on the top. And interestingly, momos have now become more like a staple diet of people all year around, whether it’s breakfast, lunch or dinner; almost like Dal Bhat, whatever the season.

“In winter, you can’t say no to momos because they also keep you warm,” Agrima adds. “In summer, it’s basically hunger and taste that keeps you hooked to it, no matter how steaming it may be.”

At present, the popular types of momos are steam momo, fried/kothay momo, c-momo and open momo. The ways to prepare each momo is quite similar; the same dough and filling technique. In case of c-momo, the momo is dipped in hot sauce, while in an open momo, the dough is wrapped around the filling but isn’t closed at the top.

Traditionally, ground meat was used as the filling in a momo. Today, however, with experimentations, there have been wide variations, and with meat, vegetables, tofu, mashed potatoes and paneer cheese have also been widely used in a momo.

Surprising as it may be, momo is widely considered to be originated from Nepal and the surrounding Himalayan region. The Newar traders of Kathmandu brought the technique of momo-making home from Tibet and modified it by using their own seasonings and variations such as the meat of water buffalo. In fact, originally, momos in Kathmandu were only buff momos.

One of the earliest and most popular momo restaurants in Kathmandu is Everest Momo Center near Gyaneshwor. On February 26, 1988, 27 years old Dambar Homros started the momo center with the aim of earning a livelihood for his family. Today, 26 years later, his restaurant stands out as one of the most loved momo places despite the increasing number of momo centers in Kathmandu.

“I started with forty staff at that time, producing around 200 kilos of momo daily,” he recalls, “And you won’t believe that I started with selling momos at just four Rupees per plate.” Today, the same plate costs Rs 110. However, his production has declined to around 20 kilos per day with only five people working for him.

“Things have now changed drastically from how they were before,” Homros adds. He thinks it is so because when he started, momo restaurants were spaced out in Kathmandu. Today, there are small to big restaurants selling momos everywhere.

Bishnu Maya Shrestha has a similar story to share. She and her husband started the small Ram Momo Center behind the Kasthamandap Temple at Basantpur Durbar Square early in 1990. Believed by many to be the oldest momo center in that area, it is also one of the most popular ones.
Shrestha says that they started with Rs. 10 per plate of momos, producing over 30 kilos of momos daily.

“It was a big task at first,” she says. “The shop was small and we hadn’t hired many people to help us.” Today it’s Rs. 50, with the production of around five kilos daily.

Both Ram Momo and Everest Momo have always made buff momos only, although Homros says that there was a time long time back when many came to his restaurant looking for momos with vegetable fillings.

Hom Nath Dawadi, 47, was a regular customer at Everest Momo Center during his college days. “People from all around Kathmandu came to Everest to taste Homros’ momos.”

Those were the days when momo was quite new to the people. Considered initially popular only among the Newars, but after Everest happened, everyone wanted to have a taste of this unique dish.

According to Shrestha, the number of people coming to her restaurants however hasn’t much changed since the opening.

“There were crowds then and there are crowds even today,” she says. “People still come to Ram Momo Center.” If some discontinue, new people who want try to taste the fabled momos of the restaurant quickly take their place. “The number of people doesn’t matter much,” she adds.

Homros agrees. He believes that no matter how many momo centers open in Kathmandu, only a handful actually go on to do well.

“I’m thankful that people still love my momos after all these years,” he adds. Today, Homros runs the restaurant with his daughter-in-law. “My son however has other plans for his life and doesn’t wish to be in this business,” he says. Ram Momo is run by the husband and wife duo.

Apart from theirmomos, it is also their homemade sauce which lures most momo fanatics to Everest and Ram. Momos have become very popular and are almost the same everywhere – the same steamed or fried dough with meat or vegetable filling.

“But homemade sauces are what set a restaurant apart, and the taste of the momo as well,” adds Dawadi.

Everest Momo’s special is its fried sesame seeds, coriander and vinegar sauce which takes about two to three hours to prepare, depending on the volume, which is particularly popular among momo eaters. “The sauce is made beforehand and stored in containers,” Homros said.

Ram Momo also has its special sauce: the tomato, sesame and chili sauce which takes up most of the morning to prepare. But like at Everest Momo, the sauce is prepared in advance and then stored in bottles.

Whether by making their own special sauce or by experimenting with the fillings, momo restaurants strive to give people a unique and satisfying momo experience. And one can rest assured that this business isn’t going to plummet no matter how high it goes. For many, it is the only source of income and has been passing through the generations as a legacy, like in the case of Everest and Ram momo centers; and despite increasing competition, these places still do well.

But Everest and Ram momo centers are only two landmarks in the grand momo culture of Kathmandu. Now, there are momo centers on every corner in the city with more or less similar stories.

And then there is our love for momo, transcending years and still on. Come summer or winter, it doesn’t matter; we always have a place for a plate or two of these hot steaming dumplings on our list every time we eat out.