From mountain biking in the shadow of Kilimanjaro to exploring amazing national parks, experience the vast wilderness and diverse cultures on this fascinating continent: 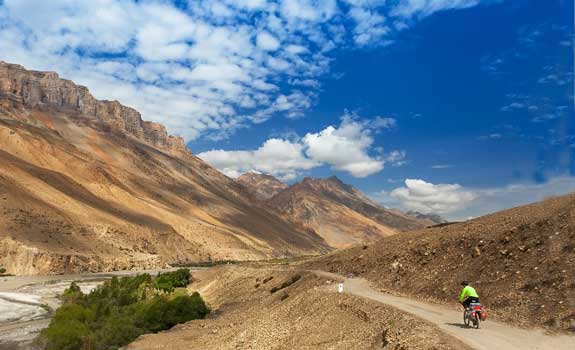 Walking up Kilimanjaro is a well known adventure but what about cycling around it? Starting in the Chyulu hills on the Kenyan side, the route keeps the great mountain in sight while traversing the Maasai plains – red-dirt roads, termite mounds, grazing savannah animals – towards the market village of Loitokitok. It then crosses into Tanzania and skirts the south side of the mountain, going through rainforest and banana plantations plus villages of the Chagga people.

Based on Nosy Be, an island off the north-west coast of Madagascar, this adventure takes you by dhow or houseboat along the coast to a backwater of coral reefs, ylang-ylang plantations, lemurs and rustic campsites. The coast is exquisite, with great snorkeling, including sightings of turtles if you are lucky. But this is not a luxury tour: nights are in simple A-frame huts. The joy is in getting off the tourist track into a timeless and a laid-back Madagascar few get to see.

Cage diving with sharks has attracted bad publicity because of ‘chumming’: filling the sea with blood and guts to attract the animals. Apex does not do that, instead uses local knowledge to find the sharks. Gaansbai is the best spot to see great whites between October and January as they come looking for snacks from the 40,000-strong fur seal colony. If you have never done it, this is an adrenaline pumping experience. You slide into the water protected by the cage, and the sharks, ever curious, mosey past. At other times of year it is better to take a boat to Seal Island – with August the peak time for spectacular breaching behavior.

Get (really) off the beaten track, South Atlantic

An island you can only get to after a five-day boat trip must be a serious lure for the intrepid. But in 2016, when the airport opens on St Helena (where Napoleon was exiled in 1815), this speck, 1,750 miles from the nearest land, will lose the sense of isolation that provides much of its charm. For now, you get there on the world’s last working Royal Mall ship, which has launched a 19 day Hideaway Tour taking in the island’s main sites (including the Boer POW camp, Napoleon’s residences and the famous giant tortoise at Plantation House) as well as 10 days on the boat. Add in tiny Tristan Da Chuna, 1,510 miles south and you can tick the most remote inhabited island in the world off your list.

On the wild side, Zimbabwe

Gonarezhou National Park is one of Africa’s true wilderness areas, a 5,000 square kilometer slice of rugged forests and rivers in south-east Zimbabwe. Along with neighboring Kruger National Park in South Africa and Mozambique’s Limpopo National Park, it forms part of the vast Greater Limpopo ecosystem. Wildlife here can be wary: the park reopened in 1994 after years of being off-limits due to war – and there is a real sense of remoteness. In the heart of the park is the Chilo Gorge Safari Lodge, run by Clive Stockil, a renowned conservationist who spent 40 years working with rhinos in the Save Valley. Walks from the lodge include a three kilometer trail to the Chivilila Falls, and you can spend three nights in a bush camp, deep in this magical part of Africa.