Are you in search of a utopia-the land of paradise in this entire planet? Then, just embark on the stunning base camp treks to chase your passion of reaching to the yard Himalayas. Quench the thrust of your years’ obsession of trekking in the Himalayas by reaching the base camps of tallest peaks in the world. Capture the grandest panorama of Himalayan peaks and catch the unique culture of Himalayan human settlements. It is real and possible under the sky – of course it is there in the Everest and Annapurna regions. The Stunning Base Camp Treks in the Himalayas, whether the treks are in Nepal or in Tibet, promises the dream of reaching the zenith of pristine paradise in this planet. The 7 Most Stunning Base Camp Treks in the Himalayas are listed here chronologically. 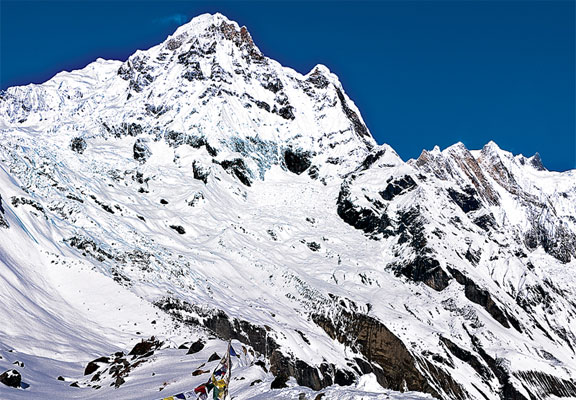 1. The Everest Base Camp trek is the grandest walk in the Himalayas. The world’s most awe inspiring mountain trail trek takes you to the yards of world famous Sherpas, the quaint Namche Bazzar, the Sagarmatha National Park, the mightiest view point-Kala Patthar, Everest Base Camp itself and close to four of the world’s six tallest peaks Mt. Everest, Mt. Lhotse, Mt. Makalu, and Cho-Oyu – those rise above everything else. Starting the trek through Lukla all the way through the colorful landscapes, you take steep ascent to Namche Bazaar, the capital of Sherpas, where you will be greeted by spectacular mountain vistas. You enjoy the Sherpa village, its culture and monasteries, the mountaineers and wild life museums. While passing through the verdant alpine forest and wildlife, raging glacial rivers and waterfalls, stony trails, mountains, and Buddhist monasteries, you get closer day by day to Everest along with other mighty mountains.

2. Mt. Everest Base Camp Trek from Nepal, another epic walk in the Himalayas, offers a huge sense of accomplishment and unbeatable views of beautiful forests, Sherpa villages, glacial moraines and foothills that surround the Everest region. Likewise, the trek takes you closer to the rich Sherpa culture while following the trail of Sir Edmund Hillary to the Everest Base Camp. It will also take you to some of the most popular places in the region like Kala Pathar which provides a stunning view of Everest along with other high mountains and the very famous Tengboche monastery, which is the largest monastery of the Khumbu region of Nepal. In overall, trekking in the Everest region relieves you from your obsessions of reaching to the base camp of highest peak in the world.

3. In Jiri to Everest Base Camp Trek, you follow the footsteps of legendary mountaineers, Sir Edmund Hillary and Tenzing Norgay Sherpa to the Base Camp of world’s highest mountain Everest on an iconic mountain trail. The trek itself is one of the most popular trek routes in the world – a once in a lifetime adventure travel hike in the company of inspiring and breathtaking Himalayan scenery. Once you make it to the Base Camp, you are suddenly filled with a deep respect for the climbers who prove human determination and hardiness by making it to the mountain top. While on the trail, you also pass through the alpine forests, glacial rivers, and enjoy the warm hospitality of ethnic people. Visit the Buddhist monasteries with prayer flags, the Sherpa and other ethnic villages with their simple yet rich mountain lifestyles. The views are gorgeous, and walking in the Himalayas proves to be quite an intense experience.

4. The Annapurna Base Camp Trek is believed to be one of the most stunning treks in the world. Mt. Annapurna rises to 8091m and is the 10th highest mountain in the world. In this stunning trek, you just imagine being in the company of some of the highest mountains on earth and the magnificence of the sunrise over the snow-capped Himalayas. This invigorating trek to Annapurna Base Camp passes through waterfalls, villages, farmlands, rhododendron forests, and mountain vistas. You also pass through a diverse geographical and cultural variation with amazing ranges of flora and fauna in between. Throughout this trek you enjoy the sheer magnificence of the Himalayas, including two mountains that are above eight thousand meters – Mt. Annapurna (8091 m) and Mt. Dhaulagiri (8167m); hospitality and rich culture of the local community and the brilliance of nature.

5. Everest Base Camp Trek via Gokyo Lakes, the adventurous trek in the stunning Everest region, takes you to fabulous Gokyo Valley, source of grand Dudh Koshi River – the large Ngojumba Glacier, the famous Cho La pass, and the celebrated view points of Gokyo Ri and Kala Patthar along with Everest Base Camp. The trek further traverses through the landmarks of Everest region in the company of majestically soaring mountains, friendly Sherpas, colorful monasteries and prayer flags, the Namche Bazzar, the Sagarmatha National Park, and many more. Many trekkers desire to visit the Gokyo valley and they feel their Everest trek incomplete if they happen to miss the trip to Gokyo Valley, Gokyo Peak, and the famous pass, Cho La. The entire area is blessed with abounding natural beauty of shimmering lakes. Beyond the tranquil appearance of the glacial lakes, you can enjoy 360 degree panoramic views of four above 8000 m massifs and other mighty mountain ranges from the best view point of Everest Region, the Gokyo Ri.

6. Makalu Base Camp Trek, another landmark of stunning base camp treks in the Himalayas, makes a trek to the base camp of world’s fifth highest mountain. Mount Makalu is a close neighbor of Mt Everest, lying in the northeast region of Nepal. The trek begins from Tumlingtar of mid-eastern Nepal, an hour’s flight from Kathmandu. Following the beautiful Barun river valley in the Makalu Barun National Park, you cross various high passes and lakes. While trekking, you rise from lowland of Tumlingtar on the Arun River to one of the highest Base Camps on earth, the Makalu Base Camp at 5000m. While on the way to the Makalu Base Camp, you will enjoy the views of the highest mountains such as Mt. Everest, Mt. Lhotse, Mt. Chamlang, Mt. Baruntse and other mighty Himalayan mountains along with Makalu (8481m) itself. Furthermore, a large variety of endangered flora and fauna are protected in the region.

7. Everest Advanced Base Camp Trek in Tibet, the heroic and stunning walk in Tibet, enhances you to experience the beautiful mountainous landscape of Tibet, the ‘Roof of the World’, while exposing you to its rich culture and history. Beyond acquainted with Tibetan culture and history, the trek will also be full of adventure and fun. Besides, you will visit popular landmarks in Tibet like Dalai Lama’s Potala and Norbulingka Palaces, ancient monasteries like Tashilhunpo, Sera, Drepung, Rongbuk, and Sakya, explore Namtso Lake, and finally reach the Everest Advanced Base Camp, your ultimate stunning destination. Basically, the trek begins from Lhasa and ends in Kathmandu. In nutshell, the trek takes you to the advanced base camp of the north face of Mt. Everest (in Tibet)-the highest mountain in the world, and offers you cultural experience of Tibet.