“We were very emotional as we witnessed the size of the devastation.”

We had contemplated whether our decision to go to Asharang was an amateur one but that soon changed when we arrived at the village. Our first view of the village was heart-wrenching as it looked like the entire village was swept away. We saw the entire village destroyed and families with children staying outside. According to our conversation with an individual from the Rural Development Committee in Asharang, of the total 226 Houses, approximately 128 houses were damaged beyond repair, 86 houses were partially damaged and 10-12 were cracked as a result of the April earthquake. The 40 year old houses that were built with stones were destroyed. We were very emotional as we witnessed the size of the devastation.

Our goal was to distribute food to the people and so we unloaded the food from the truck and started distributing relief to the village folks. We distributed per family around 30 kg rice along with 3 kg dal (Lentil), 1 kg salt and around 6 liters cooking oil per family along with tarpaulins.

There were many stories that the village folk told us. We were told of this story of a child who managed to save his younger brother from their crumbling house in the absence of the parents. They both survived unharmed but sadly lost their house. 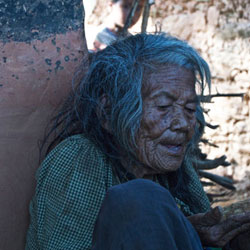 As the day went along distributing relief we also had the opportunity to meet a 105 year old woman who along with witnessing this earthquake had also witnessed the big earthquake that struck Nepal in 1934.A.D. She was 24 years of age when she witnessed the 1934 earthquake. She told us that the recent earthquake was stronger than the one from 1934. She felt it was stronger because the epicenter was Barpak, which is also in Gorkha. Luckily she did not lose any of her immediate family members in the earthquake but her house where she had lived her entire life was destroyed. She thinks that the old houses may have given away because it had a poor foundation built with stone thatched roofs and mud.

After a long day distributing relief in Asharang, we headed back towards Gorkha Bazaar wondering what awaited us in the next village.

The next day we headed towards the village of Munchhok from Gorkha Bazaar. This village was near to the epicenter Barpak. If there was a place that needed help it was the village of Munchhok. The remote village was cut off and did not receive any assistance probably because of the narrow and bumpy road. In some of the areas the roads were so bad that we had to fill the road with stones before the vehicle was able to move forward. In addition there were also landslides that made it difficult to go to and from Munchhok.

On arrival we were told that we were the only people that had arrived with relief since the earthquake. Other relief efforts had missed this remote village entirely. The people there were in need of basic amenities like food & shelter and were glad to see us bringing relief. The houses in Munchhok were damaged along with one local school. The beautiful scenic views of the Himalayas were in contrast with the dire situation in Munchhok.

After a day of distributing relief to the people of the village of Munchhok we returned following Gorkha Bazaar en route. As we looked back on two days of helping people we realized we had provided relief to more than 250 families. I knew that I would be back soon to help again.

We left for Padamchal in Kavresthali an hour’s drive from the Kathmandu valley and in the lap of the Shivapuri National park. On reaching, we saw that many houses were destroyed and people were living outside in the open fields.

We made contact with Mr. Arjun Tamang from the Kavresthali Village Development Committee who informed us that five people died and 13 people were injured in the area as a result of the April earthquake. He also informed us that Padamchal has around 185 households of which 47 houses are damaged beyond repair.

Although having been two weeks since the earthquake the people lamented on how neither government nor private agency has responded to pleas for relief. We coordinated with the Kavresthali Village Development committee and as per advice, successfully distributed relief materials. We distributed the relief to more than 50 families in Padamchal. I was grateful to Mr. Arjun Tamang for showing us around and making sure that our help went to people that really needed it.

On my 3rd volunteering effort, I travelled to Simle located in ward no 2 in Budhathum V.D.C. which was located in the district of Dhading.

It had become quite dark as we reached Simle on 11th May at around 8 pm. It was very difficult to distribute aid in the dark, so we decided to do it in the morning.

On May 12th Relief Distribution began early in the morning and we were surprised to find the people very welcoming despite the situation there. It is a testament to the character of people living in that village that even in dire circumstances, they made us feel welcome. This helpful attitude initially caught me by surprise but made me want to help more. Simle was like many other places we visited before, in need of assistance as almost 98% of the houses there were totally damaged. A total of 118 houses were damaged with one male, Padma Bahadur Ghale dead and another five injured. More people were living outside here than anywhere else we have ever seen.

We left Simle at the end of the day to stay at Bas Kharka. The following day we left for the Kathmandu valley on the 12th of May.

This is a recollection of my volunteering experience. As with any endeavour there are people that contributed behind the scenes towards the events here. I would be remiss if I wasn’t grateful for their efforts. They provided funds and their time to help the people in need. So a special thanks to Jordon Looi, Susan Chang, Philip Fluck and our team from Malaysia. I shall continue to volunteer and help in whatever capacity I can. Hopefully this will encourage other people to do the same.

Interested people may volunteer. Detail information is in the link below:
https://www.himalayanglacier.com/volunteer/