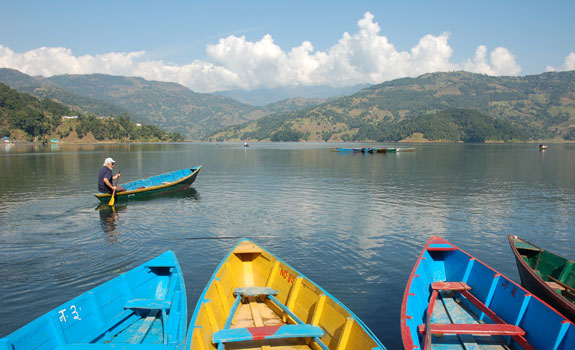 Peaceful Pokhara has a prime position beside a deep green lake, nestling among forested hills with a picture-postcard backdrop of gleaming Himalayan peaks. Pokhara Valley at 827 meters above sea level and 200 kilometers west of Kathmandu is one of the most picturesque spots in Nepal. Nepal’s second biggest tourist town may lack the historical depth of Kathmandu, but it more than makes up for this with a seductively laid-back vibe and one of the country’s most spectacular locations. Its pristine air, spectacular backdrop of snowy peaks, serene lakes and surrounding greenery make it ‘the jewel in the Himalaya’, a place of remarkable natural beauty. The beauty of the valley is enhanced by its lakes — Phewa, Begnas,and Rupa, which have their source in the glacial region of the Annapurnas. Pokhara Valley, gateway to the Annapurna region where many a trekker finds his Shangri-la, sits high on the list of ‘must visit’ places in Nepal.

Pokhara once lay on the important trade route between India and Tibet. To this day, mule trains set up camps on the city outskirts, bringing goods from remote Himalayan regions including Mustang. Renowned for its setting rather than its historical or cultural endowments, Pokhara’s bewitching beauty has been the subject of many travel writers. The dawn views of Machhapuchhare and Annapurna, mirrored in the calm waters of Phewa Tal or seen from the town’s hilltop viewpoints, are simply surreal. Pokhara has a much more tropical feel to it than other mountainous regions; a fact well appreciated by the wide assortment of flowers which prosper in its environs. The valley surrounding Pokhara is home to thick forests, rapid rivers, emerald lakes, and of course, the world famous views of the Himalaya.

Some of the noteworthy attractions of Pokhara apart from its lakes and Annapurna range skyline are World Peace Pagoda, Davis Fall, Mahendra Cave, Barahi Temple, Pokhara Museum, Seti Gandaki gorge and more. Capturing the splendor of Pokhara in words is almost next to impossible. Hence, the best way to discover the enchantment surrounding this city is by experiencing it for yourself! Please visit the following link if you wish to make Pokhara your next adventure.